Keeping things au naturel is something we’re passionate about at the House of So Cosy, and one way an increasing number of people are going all-natural with is their diet.

The number of vegans is soaring in the UK. At last count, over 3.5 million British people identified as vegan, and the number of full-time and part-time vegans is rising further still. With greater accessibility to vegan-friendly food, it’s easier than ever to follow a plant-based diet.

As well as enjoying plenty of great food and drink, indulging in a few sweeter treats is what the festive season is all about. As the following desserts prove, vegans have a lot to look forward to…

Nothing says Christmas like spiced fruit, and spiced fruit doesn’t get much better than apple spice cake! This deliciously satisfying cake is a classic winter warmer with a tasty vegan-friendly addition. The cake is topped with coconut cream vegan frosting. Vegan Abby (a.k.a. Heart of a Baker) created this recipe, here are her words of advice for when you bake your’s:

“This vegan apple cake doesn’t require any fancy ingredients and there are no special steps. However, there are a few key things you need to do to make sure your cake turns out perfectly every time. First, you need to chill the coconut cream for at least four hours to help it firm up properly. If you don’t chill the cream, you won’t be able to make the vegan frosting, which would be a crying shame.”

Another popular fruit that’s enjoyed at Christmas is clementines. This traditional layer cake consists of four tiers, each separated with light and fluffy vegan buttercream.

The vegan version of buttercream tastes no different than traditionally made buttercream with the airy texture made by whisking vegan butter with chickpea water or aquafaba.

Make your own at home with this recipe from Sainsbury’s. 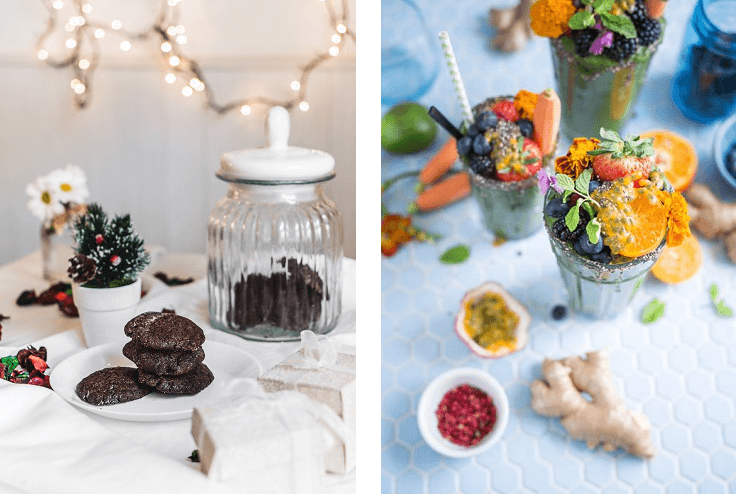 Not a fan of vegan mince pies? Try these mini pecan pies instead. A great festive snack that can be enjoyed by all the family as well as vegans and meat-eaters alike.

This recipe from Yummy Mummy Kitchen uses a roux base instead of the traditional egg base. These mini pecan pies aren’t just vegan, they’re super healthy too. Get your sugar hit from this naturally sweet treat, which uses maple syrup and coconut sugar to ensure a delectable filling.

Get cosy and wash your mini pecan pies down with a mulled cider or hot coffee. These pecan pies will also make the perfect addition to that Christmas night buffet.

The Christmas cake is an iconic part of the festive season, but you don’t have to spend an age waiting for your mixture to mature thanks to this Christmas cake recipe with a twist.

This recipe from Nirvana Cakery is vegan, gluten-free and nut-free, so Christmas guests with all dietary requirements can tuck in. The cranberry and chocolate combination guarantees a light and tart filling that’ll be the perfect way to polish off Christmas lunch.

Leave something extra special for Santa this Christmas by following My Darling Vegan’s salted chocolate rosemary cookies recipe. Don’t forget to save a few for yourself! The ultimate vegan Christmas cookie is best enjoyed warm with that fudgy, chewy texture and sweet, herby taste certain to be an instant hit.